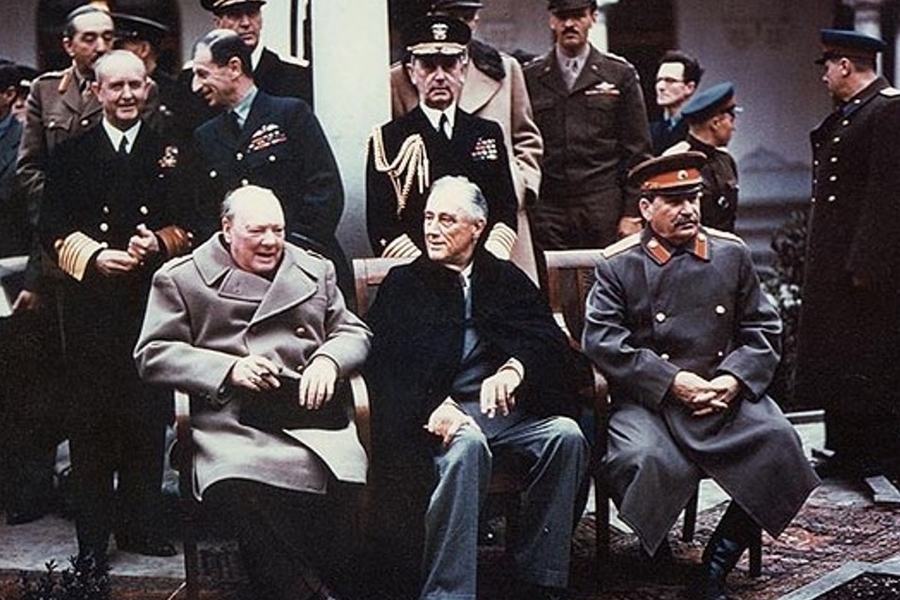 There is the well-known statement by Winston Churchill that “Russia is a riddle wrapped in a mystery  inside an enigma, so I cannot forecast to you the action of Russia”.

These thoughts were expressed by the British statesman on October 1st, 1939, at the very beginning of the World War II, in his radio speech.

At the time he had not resumed the role of the Prime Minister yet (until May 10th 1940 this post was unsuccessfully “kept” by Neville Chamberlain), but he had already clearly perceived the challenges and risks with which his country faced up. One of them was the Soviet enigma.

The British reality was harsh. Due to the guarantees made to Poland, it entered the dangerous conflict with Nazi Germany, relatively unprepared, and it was not clear whether, when, and on which side, the great Soviet Union would join this conflict.

Moscow made the Non-Aggression Pact with Berlin and was trying to establish the best possible economic and political ties with it.

Moscow used the German attack on Poland to occupy it and to annex the greatest part of this country.

Later Moscow made use of the fact that both Berlin and Western Allies were busy fighting each other and annexed the other territories in Eastern Europe, which had been the part of the Russian Empire.

Germany unwillingly gave the “green light” for such an action, whereas London and Paris directly opposed it.  However, neither Germans nor the Western Allies did not know what they could expect from the Soviet Russia.

Stalin, as the absolutely pragmatic politician, followed the new developments and did not a priori treated either side in the war as the ally. He waited for the opportunity to use any side for his own benefits. Of course, the other “centres of power” adopted the same utilitarian view on the events.

No one suffered from sentimentality. Different outcomes were possible, not only the one which actually happened.

The Nazis attacked the USSR and in this way the Soviets became the ally of the West, but it was possible as well for the  USSR to enter the conflict with the West instead of with the Germans (for instance, after the Soviet attack on Finland some people very loudly demanded that the Western allies in such a case should react by declaring war, as in the case of the German attack on Poland).

There were some other possibilities, such as the USSR to wait for the escalation of the war in the Western Front and to attack Germany at the right moment, or to make a pact with it against England after the collapse of France.

Everything was  (and still is) possible in the competition of the global players, when it comes to both their interrelations and, particularly, when it comes to the destiny of the small nations and countries, which served  only as the scapegoats to them. Serbs often forget this fact and tend to descend into the abyss of the illusions about the traditional friendship.

It is not matter with whom, the matrix is the same. Irrationality prevails and it is forgotten that there is the only one spiritus movens in the international relations: national interests!

The reminiscence from history from the beginning of this article is useful in order to understand such a principle, particularly since it focuses on Russia, the country which many people in Serbia swear by, hoping it will support Serbia at any cost.

Such a concept is ill-founded. It also implies that these people forget that Russia, regardless of the changes in the “ideological packaging”,  has always been the serious country, which completely cool-headedly, and even cruelly, arranged its geopolitical puzzle, based on its own interests. Everything else is of no importance to Russia.

It should not be reprimanded for such a strategy, but it is necessary for Serbs to be more mature in the geopolitical sense of the word, not to be naive, and, even, blind, so as not to perceive that Russia sees them as the tool in the geopolitical bargaining, particularly having in mind the fact that Moscow also indirectly admit it, although many people are not willing to decode such a behaviour.

The Russian strategy for the Balkans, both official and when it comes to the critical alternative suggestions, always starts from the assumption that in this region the policy of this great power must be the cheapest possible and burdenless.

Therefore, it is clear that from the perspective of Moscow Serbia is rather the zone of diversion, behind its Western NATO opponents, than the area of the real importance to it. The priority for Kremlin is the protection of its own dominant position in the post-Soviet area.

Kremlin has openly talked about - starting from the Yeltsin-era, to the late Putin-era. Everything else is the “upgrade” to the basic construction, often aimed at merely setting grounds for bargaining.

From this point of view, and it is the only rational perspective, it is clear that Russia, sooner or later, within the scope of the agreement with Washington, Berlin or Brussels on Ukraine, or on any other important issue in its environment, will put “on sale” the Serbian interests. It does not imply that it is useless for Serbia to rely on Russia when it comes to the status of Republika Srpska or Kosovo, but is counterproductive if it plays only on the “Russian card”.

For the time being, it is in the interest of Russia to defend some Serbian national positions, to a certain extent. Russia is not doing it in order to really defend the Serbian positions,  but to “exchange” them in the most expensive way.

Only by certain compensation, Russia will “retreat” from these “lines”. Serbia must realise it and play proactively, which means that Serbia should not be the “slave” of the calculations made by Moscow and to wait for it to change its approach to the Balkans.

The common ground should be also found with some centres of powers in the West, and by collaborating with them to reach the compromise on Kosovo’s issue and on removing the danger that the establishment of the Bosnia and Herzegovina, based upon the Dayton Agreement, would be undermined, to the detriment of Republika Srpska.

In geopolitics, to quote the ancient Greek philosopher, everything flows and nothing remains the same. However, the position of a country remains constant. Serbia is deeply placed in Europe, and it is directed towards Europe.

Whenever it was the independent country, Serbia was dominantly in the sphere of influence of the Western forces, not of Russia. Today, Serbia has the most intense economic ties with the EU, and in the military-political sphere it is surrounded by the NATO-member states.

These facts tell much about the path it should follow. It is possible to preserve the military neutrality (if it is really in the interest of a certain country, and I think this  is not the case with Serbia, but this is some other topic), but it is impossible to escape from the European surrounding.

The European Union is faced up with numerous structural problems and is clear that it is going through a tough time, but it is, at the same time, clear that it has achieved grandiose results so far and that it will survive in some form.

It is as obvious as the fact that Serbia will continue to exist in the sphere of the influence of the Western forces, which are the pillar of the EU.

Therefore, it should be the part of the processes of the political and economic development of Europe, i.e. it must not be the hostage of the Russian policy, the hostage which will be abandoned in the end, so it will be forced to follow the only possible path, starting from much worse positions than today, and it is the European path.

It is better to do it without delay, which implies taking much serious direction towards Brussels and Washington, and making efforts to preserve vital interests.

It is the wise strategy for Serbia to keep balancing for the time being, in order to gain as many advantages as possible in these turbulent times at the global level,  but the current practice less and less resembles balancing.

Serbia is falling into the Russian “basket”, out of which it would be “delivered” by Moscow, when the Russians find it suitable. There are many differences between Putin and Stalin (heaven forbid that I  see the current Russian leader in the same way as the Soviet dictator), but they are similar in one aspect - it has to do with the naked geopolitical pragmatism, by which they are governed.

Sooner or later Serbia will become the victim of such pragmatism, if it does not start to place itself at the European and international geopolitical chessboard, by using  real rational thinking, instead of pretending to do so.

The past teaches us that for Serbia Russia is not, as it used to be for the mighty England, the dangerous riddle, but, to make things worse, the predictable player, which views Serbs as the peripheral factor and sacrifices them each time when it makes an agreement with the rivals on its priorities.