Last year marked 180th anniversary of the establishment of diplomatic relations between Great Britain and Serbia. For almost two centuries, the relationship between the two countries has been oscillating from misunderstanding to absolute support or from war alliances to conflict in 1999. 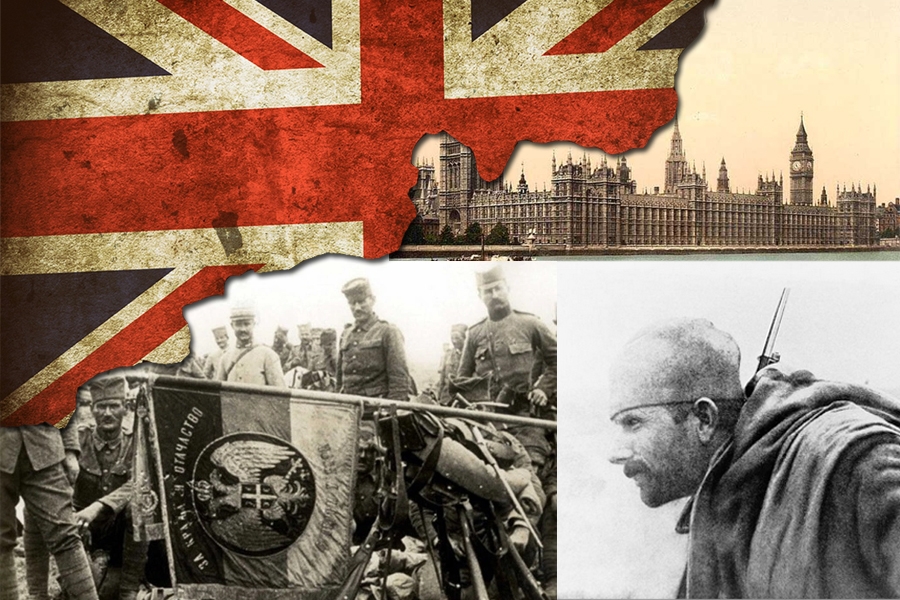 Last year marked 180th anniversary of the establishment of diplomatic relations between Great Britain and Serbia. For almost two centuries, the relationship between the two countries has been oscillating from misunderstanding to absolute support or from war alliances to conflict in 1999.

During the Great War, Serbia and Britain became unlikely allies. Unlikely because Britain had no intention to join the conflict on the continent, but was pulled in by the German invasion of Belgium. In addition, events around the regicide in Belgrade in 1903 have had an adverse effect on the mutual relationship, leading all the way to it being formally severed for three years.

In spite of unfavourable tradition, a significant turn in mutual relations happened during the Great War. Serbia’s resistance to superior opponents, its losses in different epidemics, and especially the fall of Serbia towards the end of 1915, have all left a deep impression on the British public. News of first Serbian victories as well as those of the worsening humanitarian situation have resonated with Britain of 1914.

Typhus epidemics which hit Serbia towards the end of 1914, and peaked in the first months of 1915 has affected almost 400,000 people and took at least 160,000 lives. Under such circumstances, the decimated medical personnel in Serbia was unable to hold the contagion at bay. Therefore medical assistance was invaluable. By March 1915, fourteen foreign medical units had arrived to Serbia – six British, four American, three Russian, and one Greek. In absolute numbers, these units were heavily dominated by the British who made up 64 per cent of the total of 244 medical staff. They were followed by eighteen per cent of Russians, eleven per cent of Americans and seven per cent of Greeks. Among the British, there were Englishmen, Scotsmen, the Welsh, and the Irish. With the help of foreign medical missions, which at a point were made up by Brits by two thirds British, tens of thousands of Serbian lives were saved. By June 1915, there were sixteen British medical missions in Serbia, and the total number of foreign medical workers rose to at least a thousand. Apart from medical aid, Serbian Relief Fund in Great Britain has gathered huge financial support coming from all corners of the Empire. Reception of Serbian students to continue education in Britain was also organized. British Catholic Gertruede Florence Wilde was one of the prominent activists in this cause, earning her the epithet of the “Serbian mother”. Over the course of the War, the Fund was able to collect a total of about a million pounds from all corners of the British Empire, which would be the equivalent of some 90 million pounds today (if multiplied by the average over the five years of war). All this aid was collected mostly by the citizens themselves and not through any government campaign, largely at private initiative, showing the determination of British citizens to support Serbia during the Great War. The aid was able to reach Serbian soldiers at Salonica Front, but also Serbs in war prisoners’ camps in areas controlled by the Central Powers.

In autumn 1914 British public was showing unambiguous sympathy towards Serbia. In 1915, the relationship grew to outright enthusiasm for Serbia, even glorification of its Balkans ally in 1916. Pro-Serbian euphoria culminated in June 1916, with the commemoration across Britain of the Kosovo Battle anniversary which happened at St. Vitus Day (June 28, according to Julian calendar). An advertisement of the Kosovo Day commemoration was printed in 85,000 copies and distributed in schools, churches, dailies, and through different associations. On Sunday, July 2nd services were held in churches across Britain while some 12,000 primary schools and high schools took part in Kosovo Day commemoration.

The most interesting memorial of British sympathy towards Serbia is the mural at the Foreign Office, positioned centrally at the Ambassadors Staircase. Each time a new Ambassador is presented to the Minister of Foreign Affairs, he needs to pass this mural called Britannia pacificatrix[1]. The mural’s main theme is an allegory of Britain in the form of the goddess Athena. On her left are British allies presented as female characters. The centrepiece is Athena – Britain pictured as a guardian hugging its little allies, Belgium and Serbia, represented as angels. In this manner, together with the restauration of Belgium’s independence, the re-establishment of Serbia was symbolically represented as an important part of the British war effort.

Looking back 180 years, if we tried singling out personalities who best symbolize close cultural and other ties between Britain and Serbia, two remarkable lists emerge. The one is a list of prominent Serbian anglophiles includes Dositej Obradovic, Vladimir Jovanovic, Cedomilj Mijatovic, Stojan Protic, Ljubomir Nedic, Nikolaj Velimirovic, Bogdan i Pavle Popovic, Slobodan Jovanovic i Borislav Pekic[2]. The list of British personalities who have shown extraordinary dedication in support to humanitarian effort directed towards Serbia, but also in encouraging cultural and other accomplishments within Serbia and Yugoslavia is impressive. It includes Reverend William Denton, Richard Cobden[3], archaeologist Sir Arthur Evans, first female historian of Serbia Elodie Lawton Mijatovic, Adeline Irby – first woman who became a correspondent member of the Serbian Scientific Society, but also British Prime Ministers William Gladstone and David Lloyd George, Minister Eduard Carson (who resigned over Serbia, as well as Lord Cromer,  a prominent administrator of the British Empire and the President of the Serbian Society, physician Elsie English and a number of British medical doctors and nurses. Among them are as well admiral Troubridge, historians Harold Temperley and  Robert William Seton-Watson, author Rebecca West, and the most influential British historian of the 20th century A.J.P. Taylor. The list also includes prelates of the Anglican and other churches, including several Archbishops of Canterbury, or the film director Timothy John Byford who had dual Serbian and British citizenship. More recently, a prominent place on the list was given to the author Vesna Goldsworthy, acting as a link between the two cultures.

During the First World War, in 1916 Britain has received Serbian students with open arms. Some 370 continued their education at best British high schools and universities. They were enrolled in George Heriots School in Edinburgh, but also to Cambridge and Oxford universities. Several dozens of theology students were also provided with British education. Since then, not a single year has passed without Serbian and Yugoslavian students enrolling in British universities.

Over the last twenty years or so, Britain has supported the schooling of several hundred postgraduates, but also master studies and education of experts through study stays at most prestigious British universities. For years, several best students of Belgrade’s Mathematical Grammar School as well as schools in Novi Sad and Nis, have been coming to study at Cambridge, and sometimes Oxford. Currently, Serbian City Club is active in London, gathering successful businessmen working in Europe’s financial capital – London’s City – who originate from Serbia, proving that Serbian expats are among the most successful people living in London today.

British – Serbian relations after the year 2000 have been marred by NATO’s intervention in 1999, as well as by essentially different views on the issue of Kosovo’s independence. Despite, over the past two years kind words for Serbia could be heard from the Prince of Wales, who during his regional tour made only one speech, that at the Serbian Parliament. Support was often on the lips of British Foreign Secretary who hosted a reception at the Foreign Office last year to mark 180th anniversary of diplomatic ties between the two countries. All of this is pointing to the fact that the relations between Serbia and Britain have become multidimensional. The two countries and their people are connected in most diverse ways, from science to culture to economy to sports.

The century we live in contains a wide variety of potentials for human development and further advances in science and education. British universities top virtually all of the European lists of best universities. If the 21st century is to be the century of science and education, there is no doubt that the two cultures will continue their lively cooperation exactly in that area, established by enrolling Serbian students in British schools and universities during the Great War. This cooperation has continued uninterrupted for more than a century.